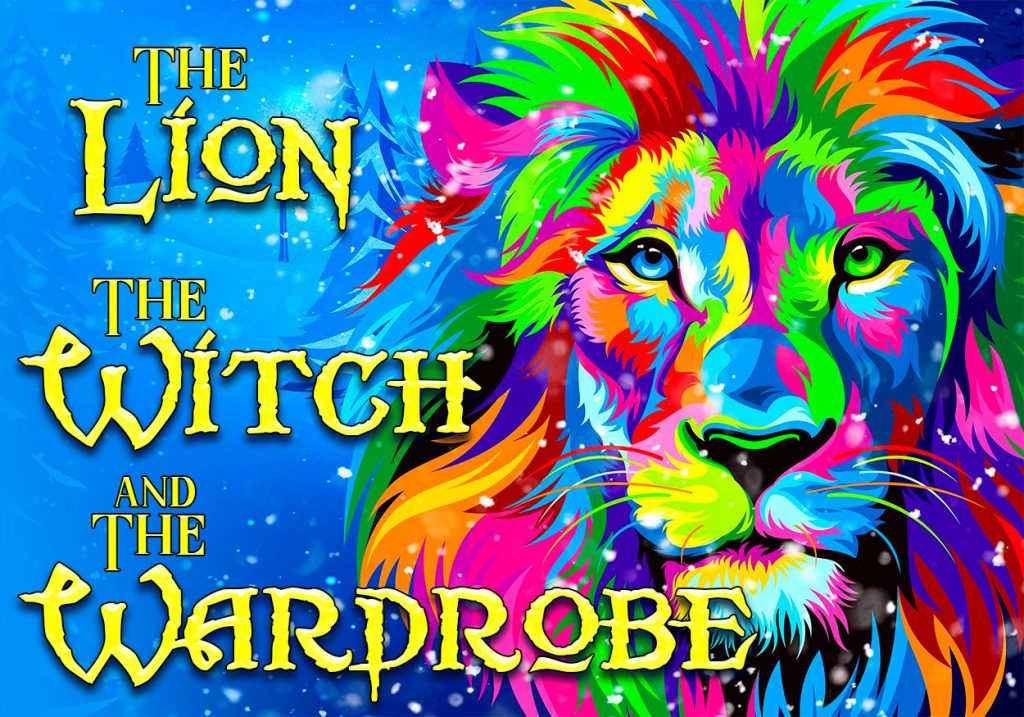 Alamance Children’s Theatre (ACT) will present The Lion, The Witch, and The Wardrobe. at the Paramount Theater in downtown Burlington, NC. The Lion, The Witch, and The Wardrobe is a play written by Joseph Robinette and is adapted from the book by C. S. Lewis. Follow Peter, Susan, Edmund, and Lucy as they embark on a magical mystery tour to the land of Narnia.

Auditions are open to youth ages 8 to 18.  A prospective cast member must be a minimum of 8 years old and a maximum of 18 years old on the day that individual auditions for the production.

Please use the following sign up genus to register for your audition spot. Walk ins will not be allowed.

If you have conflicts with the audition dates above, please send an email to LionWitchWardrobeACT2022@gmail.com. as soon as possible for an alternative method/date to audition.  These arrangements must be made prior to October 5, 2022.

Potential cast members need to attend only one night of auditions.

There will most likely not be any callbacks.

In preparation for auditions, please read these materials and bring the completed forms to the audition.  You may attach your own picture to the Audition Form.  ACT will also be taking individual pictures each night.

ACT is seeking Tech Crew members for The Lion, The Witch, and The Wardrobe. ACT encourages interested individuals to complete the form below and bring it to auditions. In this production, tech crew will be dressed in costume while performing tech responsibilities onstage.

The final cast list will be posted on ACT’s Facebook Page (and potentially ACT’s website) by Friday, October 14th at noon. Those individuals must email Rebecca Hallean to accept or decline their roles at LionWitchWardrobeACT2022@gmail.com by Saturday, October 15th at 12pm.

On Monday night, October 17th all of the cast, parents/guardians, directors, and producers will meet at Alamance Lutheran Church at 7:00 pm.  A great deal of important information will be discussed, so it is MANDATORY that each cast member and a parent/guardian attend this meeting.  A $60Participation Fee will be collected from each cast member ($50 for each additional sibling).  This fee helps to cover some of the production’s costs.  Scholarships are available to ensure that no young person is unable to participate.Please email LionWitchWardrobeACT2022@gmail.com  or speak to one of the producers at the parent meeting to make these arrangements.  Scholarship families will be requested to “Pay what they can” and will be asked to contribute additional volunteer hours to the production.

Rehearsals will predominantly occur at Alamance Lutheran Church and will generally occur between 6:00 pm and 9:00 pm on Monday, Tuesday, Wednesday, Thursday, and Friday nights. There may be a few nights that extend to 9:30 pm, multiple Saturday morning/afternoon rehearsals and potentially a few Sunday afternoon/evening rehearsals.  Some rehearsals with minimal called cast members may be at locations other than Alamance Lutheran.  Not all cast members will be scheduled for each rehearsal but each cast member will be expected to attend all of the rehearsals for which he or she is scheduled.

You must put and potential times your actor may not be able to attend rehearsals on the audition paperwork. This includes weekly classes, scheduled vacations, band concerts, or any reason your actor would need to miss a rehearsal. Failure to disclose conflicts during auditions may be grounds for removal from the production.

Tech week begins on Monday, November 28, 2022 with rehearsals each day/night at the Paramount Theater.  Tech Week rehearsals may extend to 10:30 pm.  All cast members should be present this week with no exceptions!  However, if an auditionee has a mandatory or long term commitment that may conflict with attendance during Tech Week, that conflict should be detailed on the audition form and specifically discussed with production staff at auditions.

Auditionees should be aware that participation in other productions or other activities that overlap and/or create conflicts with rehearsals for The Lion, The Witch, and The Wardrobe. may be considered in casting decisions.

Dwarf – a servant to the Witch

Father Christmas – a bringer of gifts 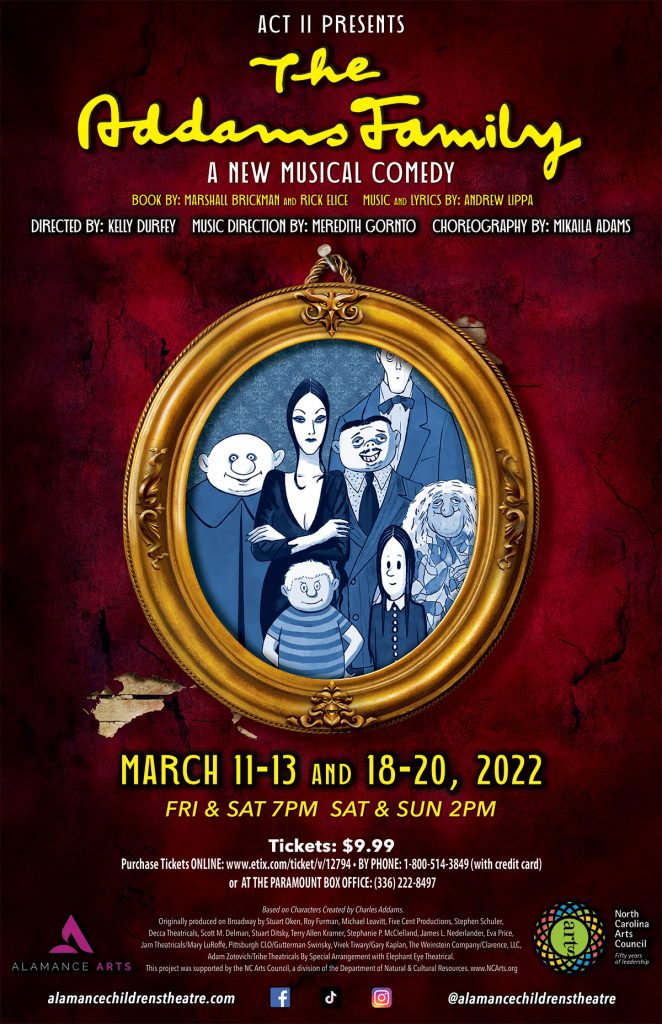 at the Paramount Theater, Burlington, NC

THE ADDAMS FAMILY, a comical feast that embraces the wackiness in every family, features an original story and it’s every father’s nightmare: Wednesday Addams, the ultimate princess of darkness, has grown up and fallen in love with a sweet, smart young man from a respectable family– a man her parents have never met. And if that wasn’t upsetting enough, Wednesday confides in her father and begs him not to tell her mother. Now, Gomez Addams must do something he’s never done before– keep a secret from his beloved wife, Morticia. Everything will change for the whole family on the fateful night they host a dinner for Wednesday’s “normal” boyfriend and his parents. 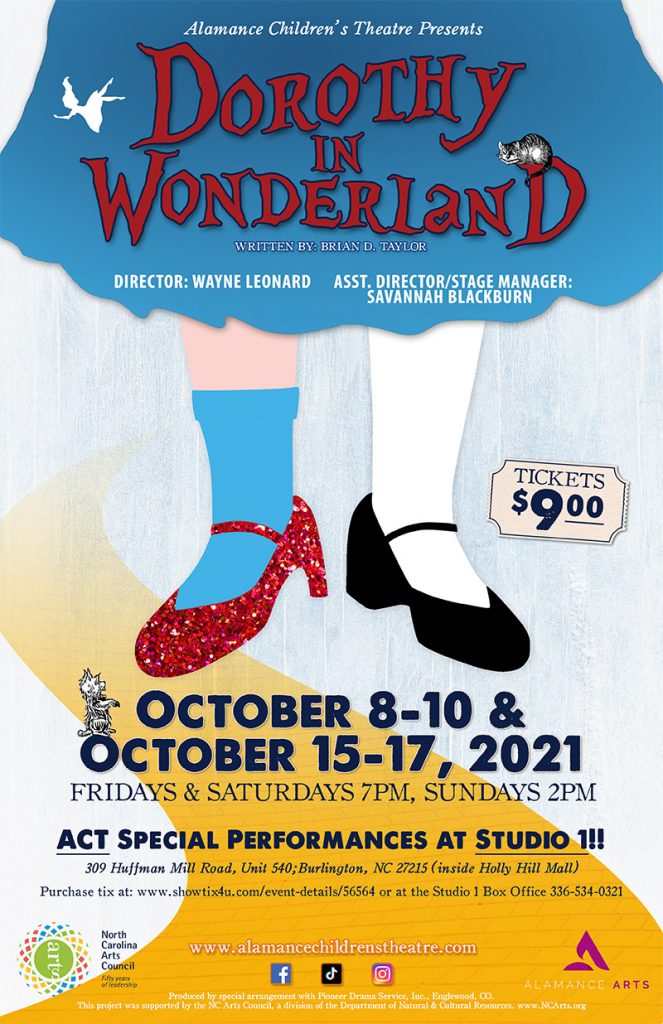 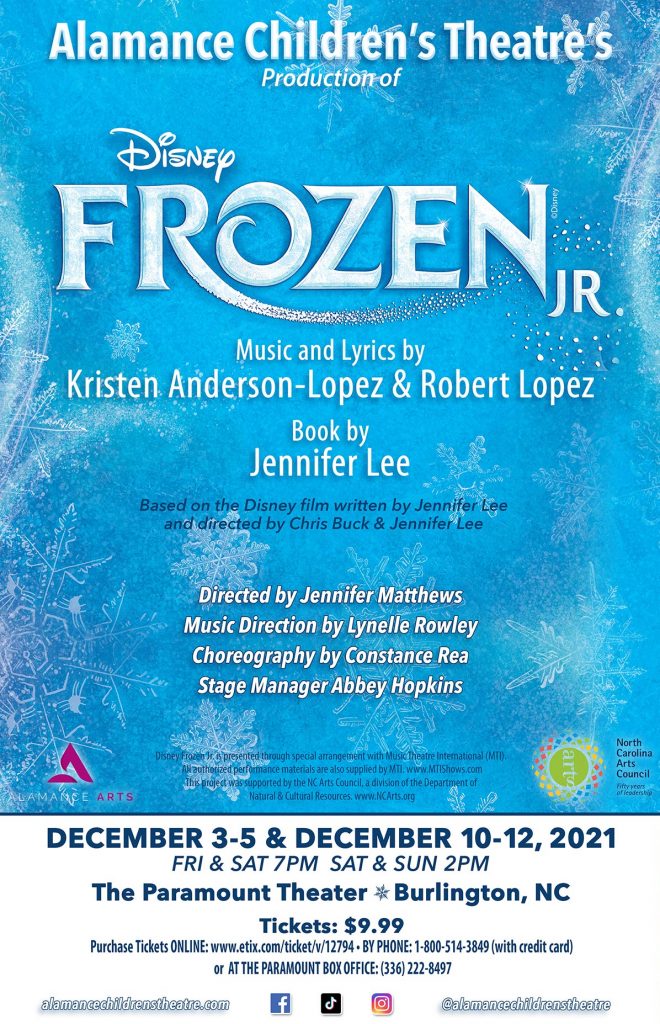 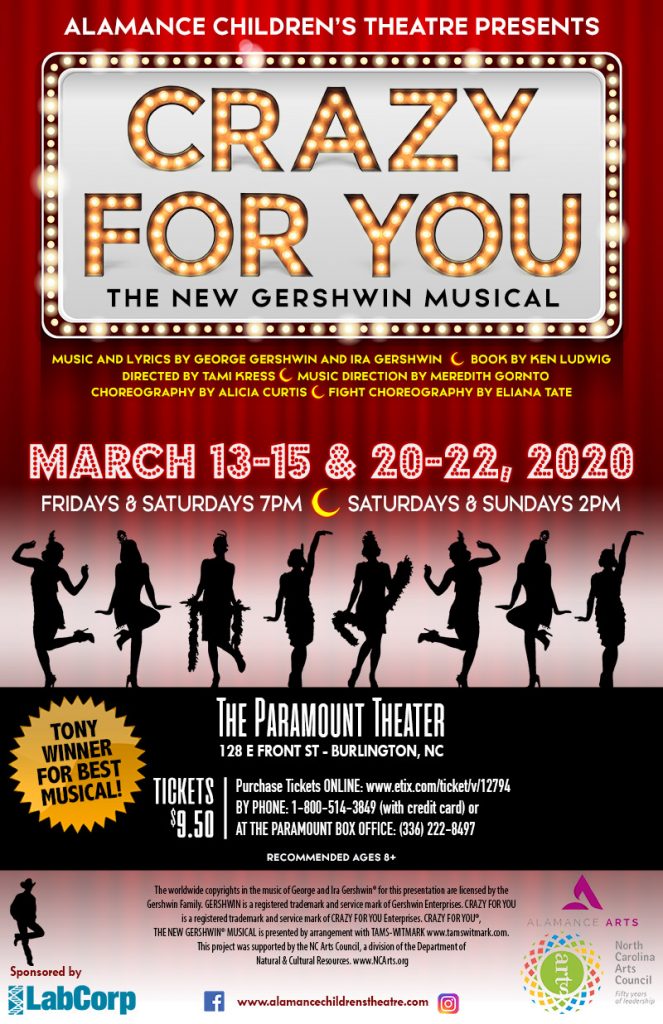 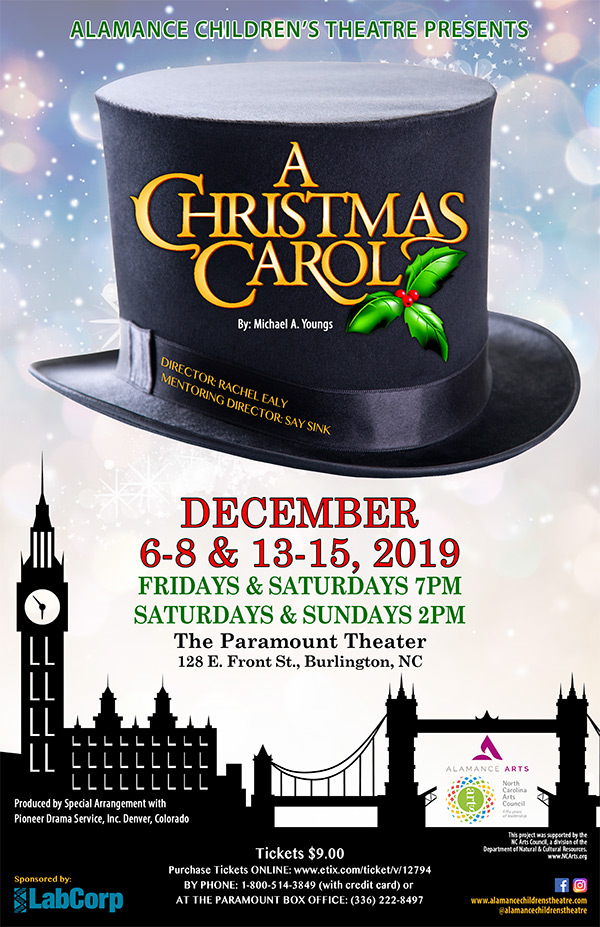 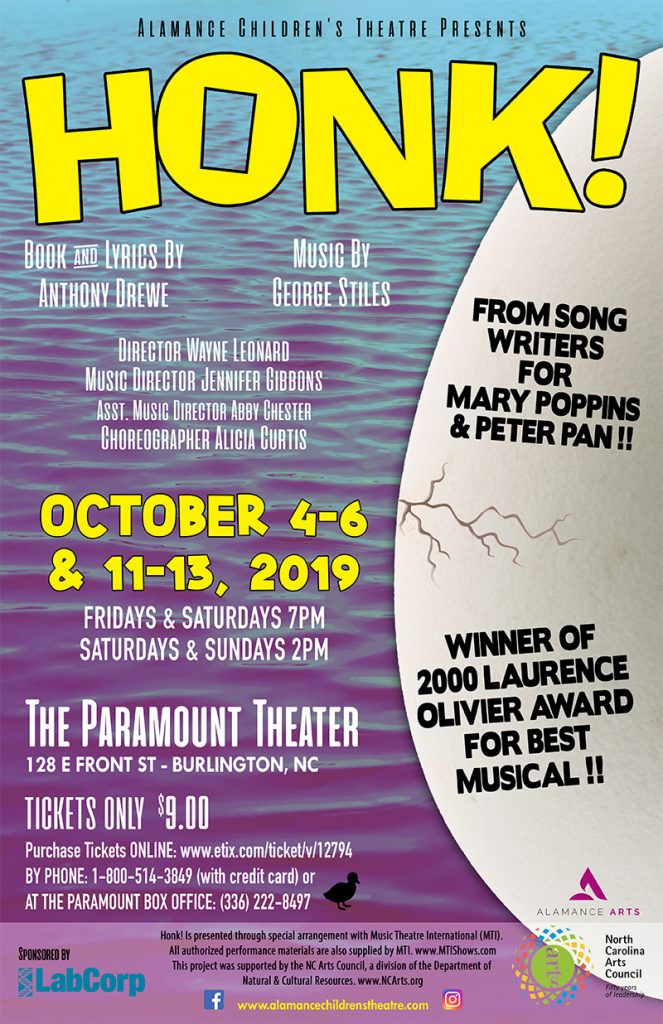 “Emotion through Acting and Singing”

Just in time for auditions for ACT’s productions of Honk! A Musical Comedy, A Christmas Carol and Crazy for You, please join us for a workshop led by Kelly Durfey.

During the workshop, you will:

Kelly Durfey currently teaches theater at Eno River Academy High School in Hillsborough.  Prior to teaching theater, she taught private piano and voice lessons for 15 years.  Local theater credits include, Shelby in Steel Magnolias, Diana Nichols in California Suite, Sarah Brown in Guys and Dolls, Appassionata in Lil Abner, and Mrs. Correy in Mary Poppins(Orange Community Players – OCP); Tatiana Racon in A Comedy of Tenors(Studio 1); Evelyn Burnett in Miracle on 34th Streetand Sitting Pretty (Odyssey Stage); recently seen in Women’s Theatre Festival in Raleigh, NC 10 by 10 Play Festival in both Carrboro and Cary, and The Ballad of Coley Cainat the Paramount Theater. She most recently directed Thoroughly Modern Millieand also directed music for OCP’s production of Annie. Originally from Knoxville, TN, she resides in Durham with her husband and two teenage daughters.

The workshop will be from 9:00am-12:00pm at Alamance Lutheran Church in the town of Alamance just south of I-85/I-40.  Participants are asked to arrive by 8:45 am if possible. Please bring a water bottle and a monologue and/or song to work on.

The workshop is open to youth ages 8-18 and advanced registration is strongly encouraged as space is limited and is expected it to fill up.  Cost is $10 per participant.  Payment is non-refundable unless the workshop is cancelled by ACT.

To register, email the completed form below ACTWorkshop2019@gmail.com.  Payments should be made via PayPal and are due by August 3, 2019.  Log into PayPal and send money to actinfo@alamancechildrenstheatre.com.